Alice Robertson Carr de Creeft was a sculptor who developed her skill in crafting animals, most notably horses, buffaloes, and bulls. Carr spent her early years in Roanoke, Virginia, until her family relocated to Sun River Valley in Montana. After completing high school in Seattle, Washington, she attended the Art Students League of New York(1919-1920) and the Art Institute of Chicago (1922-1923). She later spent three years in Paris during the years 1926-1929 during which time she studied at the Grande Chaumiere and Ecole des Animalieres and direct carving with Jose de Creeft, whom she married in 1928. During their nine-year marriage, the de Creefts divided their time between the island of Mallorca and NYC, ultimately settling in Santa Barbara, California. In addition to raising three children, de Creeft continued to sculpt.

Primarily a sculptor of animals, de Creeft focused on horses in particular. In 1921, she completed Stirrups, a model of a thoroughbred stallion. In later years she fell in love with Zamal, a desert-bred Arabian stallion owned by Sunical Ranch in San Simeon, California. [1] In 1928, while in Europe, de Creeft arrived at the studio of artist/printmaker Stanley William Hayter to buy some of his prints. A week later she and a friend revisited Hayter with a request that he teach them printmaking techniques. Intending to discourage, Hayter claimed that he didn't have a press or the equipment necessary to teach them, however, if there were two more people interested in learning, he might consider it.
A week later they were back with two others and persuaded Hayter to set up a workshop to learn the craft.

Her husband, Jose, was a sculptor who was largely responsible for the re-introduction of the direct-carving technique. He was commissioned to create a bronze statue of Alice in Wonderland in New York's Central Park. [2] Their daughter, Donna, was the model for the Alice figure. 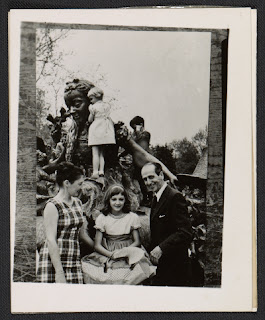 Alice de Creeft completed additional commissions, including sculptures of other horses, most notably, Secretariat in 1973. Of her western pieces, de Creeft did studies of buffaloes while she was in living in Seattle. Her sculpture, Bull (seen above) and a variety of other statues were created for Santa Barbara County ranchers. Beginning in the 1960s, de Creeft added rodeo subjects to her western themes.

Her daughter, Nina de Creeft Ward, actively an artist in her own right, works out of Santa Barbara in Southern California. She enjoys sculpting and monoprint. Here is the url to her website: http://ninadecreeftward.com/links.html.

An addendum to the above: I received an email from Barbara Decreeft who informed me that