Agnes Tait grew up in New York and, at the age of fourteen, entered the National Academy of Design. During the next five years she studied with a variety of artists until her mother's death for which she took a sabbatical from her studies. When she returned to the academy, Tait took a life drawing class taught by Leon Kroll, whose emphasis on craftsmanship and balanced design was a major influence on her own work.

While pursuing her career in the city, she worked as an artist's model for the illustrator Tenny Johnson and for George Bellows, created murals in Cooperstown, New York, wrote and illustrated a children's book and completed a commission to paint the girls of the Ziegfeld Follies.

In 1927, she went abroad and studied at the École des Beaux-Arts where she learned lithography. The following year she returned to New York, where she had her first exhibition at the Dudensing Galleries. Agnes Tait first explored lithography during the Depression era of the 1930s. She was frequently employed as a mural painter, most notably for Manhattan's Bellevue Hospital. Tait traveled to Europe a second time in the early 1930s and returned via Haiti and Jamaica, which fostered an interest in tropical scenes. Her first solo exhibition, of portraits, took place in 1932 at the Ferargil Galleries. [1]﻿﻿﻿﻿
Tait married in 1933 to journalist William McNulty. The following year, she was employed as a painter under the Public Works of Art Project during which she executed what is considered her most famous work, Skating in Central Park.
﻿﻿﻿﻿﻿﻿
Throughout the 1930s, Tait worked on small lithographic editions and mural work. In 1941 she and her husband relocated to Santa Fe, New Mexico where she remained a resident until her death. While living in Santa Fe, Tait did a number of commissioned portraits and studies of cats. 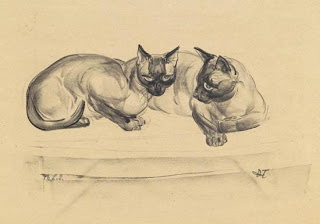 Agnes Tait
Siamese Cats
c.a. 1925
7 x 12 inches
Oil pastels on cream wove paper
Private Collection
﻿
Agnes focused much of her attention on northern New Mexico, particularly its landscapes, adobes and churches, and various ethnic groups. Her lithographs, watercolors, oils and works in other media included titles such as Lane in Santa Fe; El Christo Rey; Sanctuario de Chimayo; Little Navaho; Pilgrimage to Chimayo; Canyon Coral, and Pecos Valley. [2] She also completed two murals during her time in Santa Fe-one, notably for the Frist National Bank of Santa Fe that depicted the entry of General Stephen Watts Kearny into the city during the Mexican War which she completed in 1953. 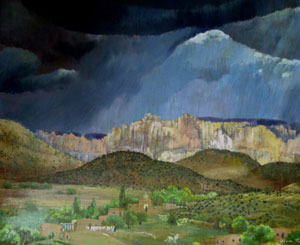 Agnes Tait
Summerstorm
c.a. N.D.
No size given
Oil on canvas
Tait exhibited at a number of shows in the east and in the west. Collections of her works are in the New Public Library and Metropolitan Museum of Art in New York, Library of Congress, National Museum of American Art in Washington, D.C., Yale University, Wichita Art Museum, Roswell Museum and Art Center, Museum of New Mexico, and School of American Research, Santa Fe.
Tait was a member and exhibitor in 1936 of the National Association of Women, a seven-time exhibitor at the Art Institute of Chicago between 1915 and 1936, an exhibitor in three annual exhibitions of the Pennsylvania Academy, and in four annual exhibitions of the National Academy of Design.  Other exhibition venues were the New York World's Fair in 1939, Weyhe Gallery, New York City in 1973 and the Los Angeles County Museum of Art in 1976.