I've been teaching Advanced Placement Art History for twelve years and, in early 2013, finally achieved my educational dream of earning a PhD in that discipline. My focus was on early twentieth century female artists in America, several of which I've included in the course of this blog, however the teaching of the history of art includes all eras, all cultures, all economies, and everything that encompasses an "ism." This trip to Europe allowed my husband and me to explore two of my favorite sites of ancient art and architecture: Pompeii and Paestum. For those of you that are fortunate enough to have been, no description or photograph in a book can accurately capture the emotion of being there, standing where those people lived, worked, and played in cultures that no longer survive. 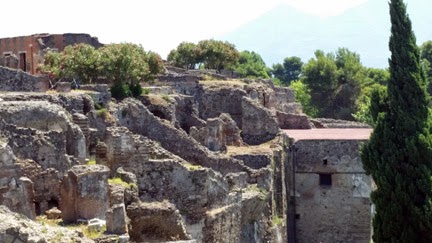 The city of Pompeii was an ancient town near Naples that was buried under twelve different layers of ash and other materials in the CE 79 eruption of Mount Vesuvius which, you can see from the photo above, looms only about five miles in the distance. Covered beneath 25 meters of "stuff," the towns, which included Herculaneum and other villas in the area, were abandoned and their names became part of the legend of the area. In 1599, a small portion was uncovered in the digging of a channel, however, major excavations did not begin until 1738 when workers were digging the foundation for a summer palace for the King of Naples in Herculaneum. After that, by 1748, intentional excavations began in Pompeii by the Spanish Military engineer, Rocque Joaquin de Alcubierre. 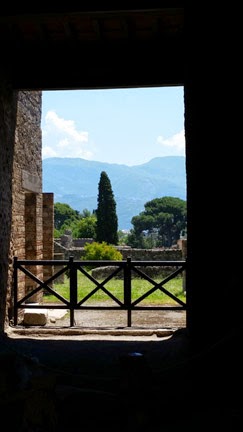 We battled our way through hoards of tourists who we hoped were there for the same reason we were; to learn about and perhaps experience a bit of what it was like to live in such a town 2,000 years ago. We spent most of the day exploring, but were not able to see some of the specific ruins that I wanted to view due to the enormous number of groups with tour guides making many of the lanes impassible.

Note to self: go back, OFF-season.

Despite the crowds, there were opportunities to shoot in somewhat less congested spots, and to get a feel for the peace and beauty of Pompeii as it might have been when it was just a town. In addition, there were sections of frescoes and sculpture everywhere. Pompeii suffers from the elements, however, and although restoration and the arrest of decay is ongoing, it is an outdoor, living museum, where almost nothing is protected under any kind of canopy or roof. As recently as 2010, the 2,000 year-old House of the Gladiators, a structure used by gladiators as they trained before fights, collapsed without a specific known cause other than age, exposure to the elements, and neglect.

Unlike in a typical museum, you can touch nearly everything. The sculpture below is situated along a wall outside the baths under a loggia (a covered walkway) with what was, at one time, a frescoed wall behind her. For me, the tactile, being able to feel the stone, the walls, walk on the streets where an entire colony of people thrived is a mystical thing-you can almost feel the spirit and the energy of those 20,000 souls whose lives were lost that tragic day. 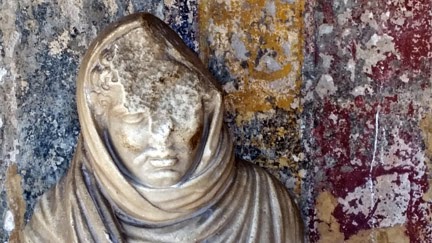 I learned that there was no word in their language, which was Latin, for volcano. There hadn't been an eruption during their lifetimes and the tremors that were precursors to the event were shrugged off as merely familiar shaking, common in the Campania region.

We plan to return to Italy to further explore Pompeii and Herculaneum, and to see so much of what we were unable to find the first visit.

Our next stop was Paestum, a major Greek city established to south of Naples and founded about 600 BCE. It is the site of the ruins of three of the most spectacular Greek temples found anywhere. The Greek settlers called the city Poseidonia in honor of the Greek sea god, Poseidon. In spite of the name, however, Poseidonia probably did not have an important harbor. It was, at that time, separated from the sea by a shallow, fresh water lagoon and could be reached only by smaller ships. Because of its location on a fertile plain, Hera, the goddess of fertility, became the predominant divinity. 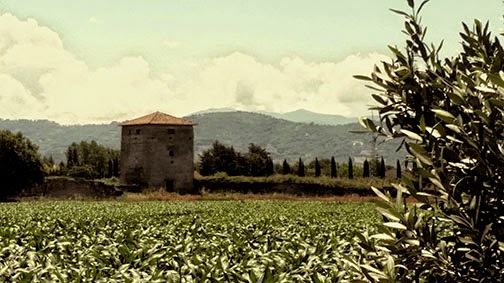 When you arrive by train from the Naples/Salerno area, the tiny station sits in the middle of beautiful countryside surrounded by fields and low hills in the distance. The views were postcard pretty in every direction. I had fun with some of the filters on my camera-this one is called, "Nostalgic." 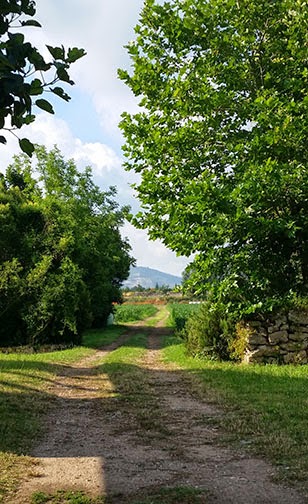 It's quite a walk down a lovely country lane lined with trees and low stone walls. From the train station to the archeological site, we heard nothing but the sounds of birds as musical accompaniment along our trek. It was early in the morning, so we had the road to ourselves. As we strolled along, we could peer through openings in the trees along the way to catch sweet vistas of hills, farms, and houses. We were startled by intense squawking which turned out to come from a group of gorgeous peacocks that were completely uncooperative subjects to photograph. 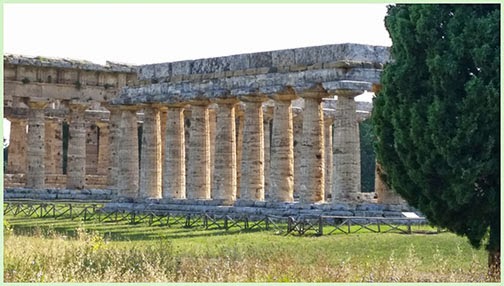 The road from the train station ends at the Paestum site. As we headed around to the entrance past vineyards and all manner of crops, we saw the enormous temples in the early morning light. They looked simply unreal. Just like in Rome, it was mind-boggling to attempt to figure out how the ancients were able to construct such gigantic temples, amphitheaters, and coliseums with the technology of their day. 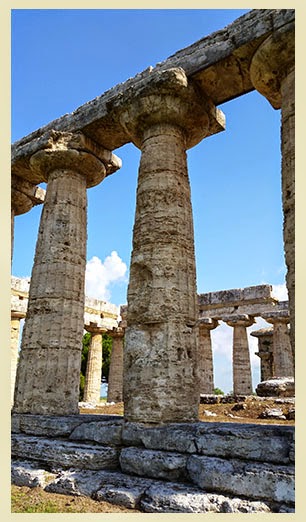 Unlike Pompeii, where there were crowds of people everywhere, Paestum was deserted. Only one other couple entered the site along with us at that early hour which was terrific on the one hand, but disappointing on the other. I don't think most tourists have ever heard of it, and it is only about a 30-45 minute trip directly south of the Naples area.

The temples were built starting in 550 BCE and constructed over a relatively short period. There are two temples to Hera, and one dedicated to Athena. Like Pompeii, you can walk up to most of the ruins, but, unlike Pompeii, it was quiet with time to reflect on the power of the Greeks who were able cross the sea to colonize in Southern Italy.

We were able to touch these magnificent monuments that stand from a powerful civilization that again, is no more. I grew up in and around Washington, D.C., surrounded by sites and architecture of some of the earliest history of America and yet, the Old Stone House, the oldest unchanged house in the city dates, back to just 1765. It's impossible not to be awed by the enormity of these ancient temples to the gods and their construction techniques.

Paestum is also known for its large numbers of painted tombs. The Tomb of the Diver is significant because it is the only known wall painting from the Orientalizing, Archaic, or Classical period (era designations to group Greek art and architecture) to survive in its entirety. The tomb was created about 470 BCE and the slab with the diver is one of five limestone blocks that make up the top and four sides to the tomb, all decorated in the fresco style. The fresco technique means the slabs were painted with plaster, after which a stylus was used to incise the design. The artist painted the incised outline in a thin red line, then filled in areas with black, red, blue, green, and white. The Tomb of the Diver is so-called because it depicts a young man diving off a stone platform into a pool and it is believed that the scene represents the plunge from this life to the next. This fresco is also in my Art History book and it was a thrill to see it in situ after looking at its photograph on a page for the last 14 years! 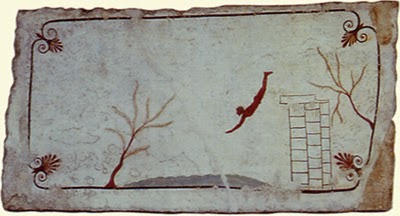 Next-from Paestum, we headed to Southern Italy to explore ancient mountain towns, and then flew north, to Venezia.

If you would like to discover more about the history of Pompeii and Paestum, here are several links:

Posted by Dr. Viki Sonstegard at 11:04 AM No comments: