Avis Chitwood was an artist who began to create at a young age and spent nearly one hundred years at her craft. Her interests ranged from etching, painting in oils and watercolor, to architecture and graphic design, however, she is best known for her lovely paintings of wildflowers and drawings of the rustic buildings, bridges, missions, and native birds of Kansas.

Chitwood grew up in Mound City, Kansas and Kansas City, Missouri where she graduated from high school and served a four-year apprenticeship in an art studio there. In 1922, Avis settled in Topeka where she spent twelve years in an arts and crafts shop perfecting her watercolor technique and ceramic decoration. She studied at Washburn College (now University) and taught there for a time as well. Chitwood continued her studies in art and architecture at the University of Kansas in Lawrence and taught etching in adult education classes. She claimed: "the strong contrast of black and white has a dignity and strength that appeals to me."[1] In addition, Chitwood worked as an artist and draftsperson for the Kansas State Highway Commission during the years 1948 to 1974. [2]

In 1941, Chitwood and fellow artist Margaret Whittemore (featured previous artist) traveled across Kansas sketching birds, wildflowers, and other points of interest. Their collaborative work became serigraphs and lithographs that were popular collectables.

﻿
Avis Chitwood was a frequent exhibitor in Topeka between 1922 and 1940 where she won numerous first and second prizes in etchings, china painting, and block prints. She was represented at the Midwestern Artists' Exhibition, Kansas City, MO (1936) and held one person shows at Kansas State College, Manhattan (1944), and the Brewster Gallery, Topeka (1965, 1967). [3] Among these accolades, Chitwood was proudest of her copper plate engraving entitled "Carousel" being exhibited at the Nelson-Atkins Museum of Art in Kansas City. She never stopped creating art, and was still drawing up to her death in Topeka at the age of 100. 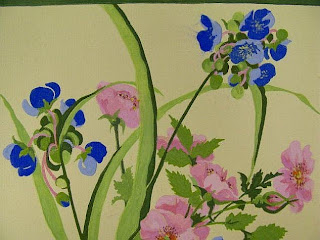 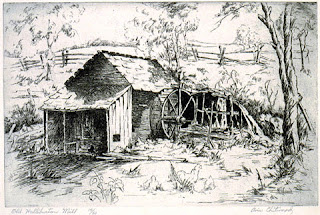 The only photograph I could locate of Chitwood as an adult is found here: http://www.flickr.com/photos/topekalibrary/2919087675/.  The photograph was taken in 1965 when she was 71 years old and shows Avis Chitwood surrounded by her artwork. Chitwood's illustrations for publications of the State Highway Commission, Capper's Household Magazine, and other local periodicals, advertised the beauty of Kansas-the "best kept secret!"

Posted by Dr. Viki Sonstegard at 9:13 AM