Ila Mae McAfee was born in 1897, in the small ranching community of Sargents, in southwestern Colorado near Gunnison. Her artistic interest began early and centered upon horses, which she would draw as a child. After she graduated from Gunnison High School in 1916, McAfee spent time in Los Angeles at the West Lake School of Art and the Haz Art School (1917-1918).
McAfee received her Bachelor's degree in art from Western State College, but her formal art education was at the aforementioned Haz Studio School in Los Angeles and at the Art Institute of Chicago. She decided to study under muralist James E. McBurney from whom she had taken courses in Chicago. McBurney hired McAfee as his assistant until 1924, after which she traveled to New York to study at the National Academy of Design and the Art Students League. While in New York, McAfee worked as an illustrator and a painter of miniatures and did illustrations for Blue Book, Ranch Romances and other magazines.

In 1926, McAfee returned to Colorado and married Elmer Page Turner, an artist she had met on her parent's Colorado ranch. She and Turner moved to Taos in 1928 to be a part of the burgeoning art movement of the region. There, they built White Horse Studio, which would serve as their studio and home until 1993. 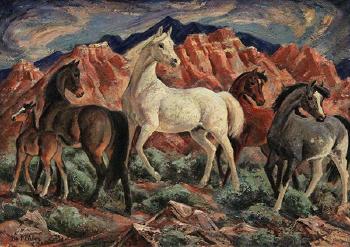 Ila McAfee
Alert
ca. N. D.
Oil on canvas
20.25 x 28.25 inches
In Taos, McAfee painted landscapes and figures, but her specialty remained animals, specifically horses. She also worked as an illustrator of children's books. She worked on a number of murals, as well, though she was most famous during her lifetime for something entirely unrelated to her art; she owned a series of cats, all named Sanka, to whom she taught as many as seventy five tricks each. 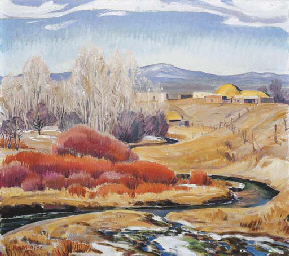 In addition to over a thousand easel paintings, which are represented in numerous public and private collections, McAfee’s murals were placed in the post offices of Clifton, Texas, Cordell and Edmond, Oklahoma and Gunnison, Colorado, as well as in the public library of Greeley, Colorado. She was a  friend of the noted Western art collector, Lutcher Stark and painted fifteen portraits of Lutcher’s longhorns at "Shangri-La." She also received every award that could be won at the New Mexico State Fair professional juried show.

In Taos, she became known for her pueblo paintings and her depictions of horses and other animals as well as Native Americans, ranch scenes, and landscapes. During an interview for Southwestern Art 20, Rita Simmons asked about her first impressions of Taos. McAfee said, "[Taos] was so different then, the village was small and the Indians remained uninfluenced by the invaders. Once I asked one of them, "What did you call this country before the Europeans came?" 'Ours,' he told me."

In 1981, she was voted Taos Artist of the Year.  In addition, she worked as a WPA artist, completing a number of commissions for post office locations such as Edmond, Oklahoma, and Clifton, Texas.