﻿
﻿ ﻿﻿
﻿The Armory Show, formally known as "The International Exhibition of Modern Art," held in New York City in 1913, was the first opportunity for Americans to see the new art styles that had been developing in Europe. The show became a turning point in the history of American art. It introduced those who were accustomed to realism to the experimental styles of the European vanguard, including Fauvism, Cubism, and Futurism, by such artists as Picasso, Marcel Duchamp, in addition to women artists such as Mary Cassat and Russian painter, Lyubov Popova. The show served as a catalyst for American artists, who were determined to create their own "artistic language."

The term "Modern" art includes artistic works produced during the period extending roughly from as early as the 1860s to the 1970s, that denotes the style and philosophy of the art produced during that era.[1] The term is generally associated with art in which the traditions of the past have been discarded in a spirit of experimentation.[2] Modern artists played with new ways of seeing and with the attempt to discover fresh ideas about the nature of materials and functions of art. Many artists moved away from the narrative, a typical mode of representation for the traditional, toward abstraction, which is characteristic of modern art. More recent artistic production is generally referred to as Post-Modern or, art that is created in the present, Contemporary art.

Modernism can also be defined as taking a series of responses to a situation, and to wrestle universal principles from the collision between the two. Modernism was not merely defined by its avant garde, but also by a reforming trend within previous artistic norms. [3] Contrary to those artists and critics from the East, specifically New York, California was a region that inspired modernists from both Europe and the United States to relocate in order to explore the experience of the climate, popular culture (Hollywood), and all of the freedom from the social problems and the debates that raged over European modernism.

Though small in number, in comparison to the artists working in the European capitals or in New York, Los Angeles and San Francisco drew artists, writers, musicians, and composers that expanded the cultural horizons and created a new found cosmopolitan atmosphere to the region. Traveling exhibitions of contemporary painting from coast to coast had a profound effect on pulling California artists onto the national and international stage. Women artists involved in the movement out west tended to be independent, free thinkers, and representative of the "New Woman." Self-sufficiency and eccentricity was considered an asset. 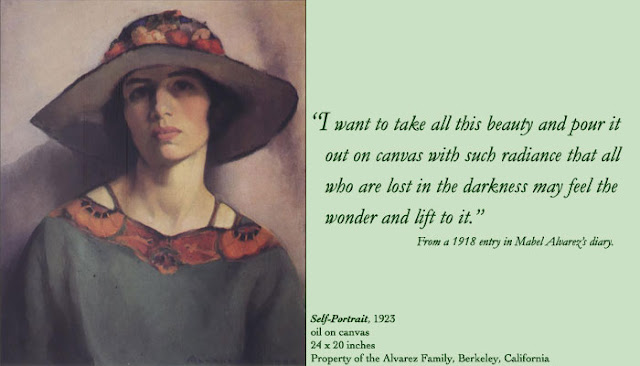 Mabel Alvarez was born on November 28, 1891, on the Island of Oahu, Hawaii, the youngest of five children. Her father, Luis, a Spanish-born physician, was involved with the leprosy research begun by the legendary Father Damien. The family moved to the mainland in 1906, where they settled in the town of Berkeley in Northern California, then to Los Angeles in 1909 where Mabel attended Los Angeles High School and found her niche-art.

Her high school art teacher, James Edwin McBurney had received a commission to create murals for the Panama-California Exposition to be held in San Diego in 1915, and engaged his former student to work for him. Alma May Cook wrote that “demure, little Miss Mabel Alvarez” had created a mural in which “every stroke spells the poetry of springtime in California."[4] Alvarez’s work at that time was marked by an interest in Symbolism and Art Nouveau, and in the color and atmospheric effects derived from Impressionist painting, a highly influential style that was popular in Southern California during that period. American Impressionists rarely dissolved form as the French had done, and Alvarez’s mix of careful rendering with an Impressionist-inspired palette is typical of plein-air methods practiced in California early in the century.


﻿﻿Alvarez's skills continued to improve as a result of her contact with her second significant instructor, ex-Bostonian William Cahill, co-founder of the School for Illustration and Painting. Again, her skill was recognized as exceptional when one of her drawings was reproduced in the school’s 1916 brochure. It clearly demonstrates her extraordinary skill in academic rendering. 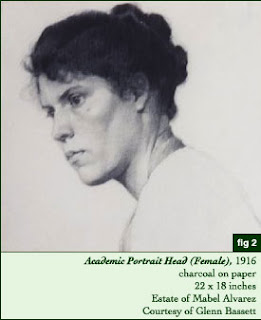 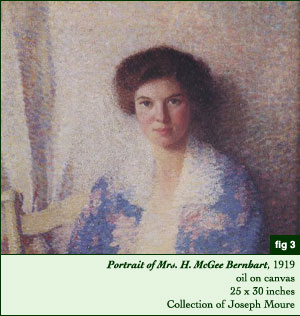 Her first portrait painting was displayed at the Los Angeles Museum (now the Los Angeles County Museum of Art) in 1917, a museum with which she continued a close relationship throughout her life. Her technique displays a mix of Realism and Impressionism. The sitter’s features are rooted in realism, while light and color flicker around and on her in a manner derived from Cahill’s well-known 1919 painting, Thoughts of the Sea, featured in the same California Club show.[5] Had Alvarez focused on the development of a personal style of California Impressionism, she may have become one of the movement’s premier practitioners. Los Angeles Times critic Antony Anderson wrote in his review of this show that “This young artist, always an earnest student, is advancing with much rapidity, doing better and more distinguished work from year to year."[6]

Alvarez embraced aspects of popular regional painting.While a student of Cahill’s, Alvarez took singing lessons, attended concerts and local exhibitions, met with fellow artists (including those with experimental tendencies like her own, such as Henrietta Shore), and discovered the Theosophical writings of Will Levington Comfort (1878-1932). who ran a spiritualist colony in the Hollywood Hills, where he lectured and monitored group meetings. A temple, a lotus pond, and a Greek theater were available on the grounds where Alvarez attended  meetings she embraced aspects of popular regional painting. Alvarez attended many meetings at the colony, as well as meditation sessions in Comfort’s home in Highland Park.

Her first exhibition as a professional artist occurred at the San Francisco Art Institute’s annual show in 1918. [7] Alvarez joined the ranks of the influential California Art Club the same year, where she won an honorable mention in her debut exhibit with that organization, and she received regular positive press for her painting (critic Pauline Payne likened her color work to “mosaic”). [8]

In 1919 Mabel Alvarez met the man who would have a profound influence on early Modernist art in California, Stanton MacDonald-Wright (1890-1973). She became his student, and her own words from 1928 describe the effect of his teaching:

"My idea of painting is so different now from the formless idea of it I had when I started...With Bill [Cahill] we learned to paint in the Impressionistic manner with broken color. We were never allowed to use black. As I remember he limited us at that time to red, yellow and blue. I struggled for months with the “direct” method - a most difficult process...When I started painting for myself alone, I gradually forgot all “methods” in my interest in getting the feeling of things I wanted to do....Then came the study in color and drawing with Macdonald-Wright. That opened up a whole new world. I haven’t come to the end of it yet." [9] 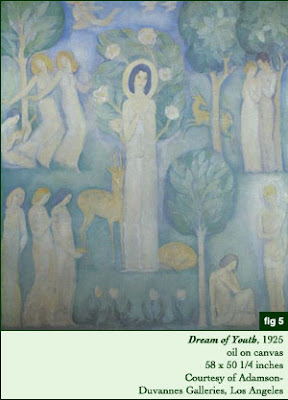 Color plays an important role in Alvarez’s symbolic paintings. Green, tinged with blue, is the dominant hue of Dream of Youth, an image of stillness and stability stemming from the central figure’s Madonna-like presence. In 1924 Macdonald-Wright had privately published his Treatise on Color, distributing copies mainly to his students. In his Treatise, he discussed the emotional meaning of each color in the spectrum and called green “a disciple of non-action, of calm and of quiet.” [10]
﻿
﻿ ﻿ In 1927, Alvarez was introduced to the work of Morgan Russell when he held a joint show with Macdonald-Wright at the Los Angeles Museum. In 1931, Russell moved to Los Angeles and taught at Chouinard, befriending Alvarez. About this time, Alvarez’s subject matter evolved away from the mystical and became more sensual. She turned away from the symbolism of the mid-to-late-1920s work to a series of realistic semi-draped figures, most of them of her friend and favorite model Arabella.Morning, won first prize at the California Art Club’s 1933 Annual Exhibition. During the 1930s, Alvarez’s continued to search and experiment. Perhaps inspired by her friend Conrad Buff, one of California’s most accomplished printmakers, she made her first lithographs. Though never fully committed to the medium, she made a number of prints and exhibited them locally and in national shows. In addition, she made ceramic tiles and figures, working with her friend and fellow-artist Maxine Albro.


After a lengthy relationship failed, Alvarez returned to Hawaii in 1939at the invitation of a friend. While healing there, she painted colorful portraits, still lifes, and landscapes. In 1940 the artist was back in Los Angeles and was the subject of a one-woman show at the Los Angeles Museum in August, 1941, that featured the work she had created in Hawaii. During the Second World War, she volunteered for he Red Cross.

During the 1950s, Alvarez continued to explore harmonious color relationships as she referenced subject matter derived from her travels, especially trips to the Caribbean and Mexico: fruit markets, churches, and festivals became her inspiration. Stylistically her palette moved in a decorative direction, exploiting the possibilities of bright pastels layered over each other with ethereal brushwork. 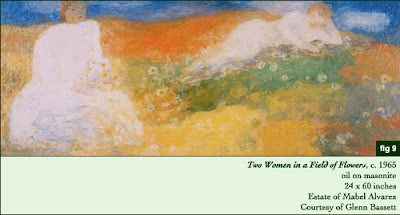 In the 1960s,
Alvarez returned to her long-time interest in women as subject matter, and in themes of youth, growth, and regeneration...all that flowers represent. She continued to paint throughout her sixties and seventies, and to exhibit regularly, including with the Women Painters West organization. The later years of her life were spent in a retirement apartment and then in a nursing home. She died on March 13, 1985, at the age of ninety-three.

Posted by Dr. Viki Sonstegard at 9:00 AM